We are in the midst of epidemics of:

Fifty years ago, obesity was relatively rare, and type 2 diabetes levels were low.

How did we get in this mess?

Prior to the 1950s, heart attacks were few and far between. However, during that decade the incidence of heart attacks started to increase. And when US President Dwight Eisenhower suffered a heart attack in 1955 the public started to be concerned.

At the time there were two competing theories as to the cause of “heart attack”. In Britain, Professor John Yudkin was convinced that excess sugar intake was the cause of the heart disease epidemic. His theory was supported by a number of research experiments and he wrote a convincing book: “Pure White and Deadly”. 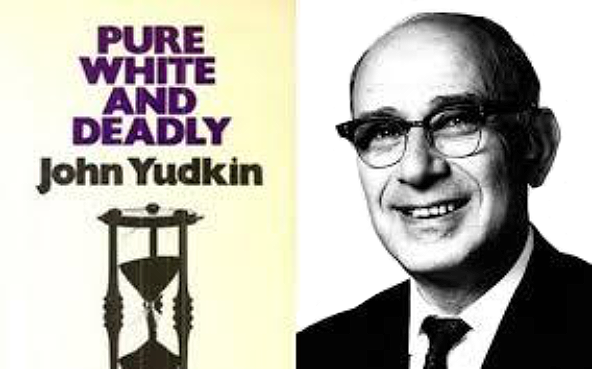 On the other side of the Atlantic, American researcher Ancel Keys was promoting his diet-heart hypothesis on the basis of two studies. The first was known as the Six Countries study and it claimed to show that consumption of fat was related to death from heart disease. The second was the Seven Countries study and it narrowed the culprit down to saturated fat.

The story of how Keys’ low fat movement won out over Yudkin’s low sugar recommendation is a fascinating web of intrigue and corruption.

History is littered with examples of how vested interests have influenced dietary advice. For example, a very influential Harvard University study published in 1967 had a huge influence on eating habits in the U.S.. But, guess what? It turns out to have been funded by the sugar industry.

The diet–heart hypothesis has been the backbone of conventional dietary treatment for heart disease for over 50 years. It’s led doctors, specialists and dietitians to promote low-fat, low-cholesterol, high-carbohydrate diets with great fervor. Despite the popularity of the diet–heart hypothesis, the reality is that rigorous scientific research does not support this theory!

The wholehearted endorsement of the diet-heart hypothesis and the promotion of saturated fat as the dietary evil greatly influenced the Dietary Guidelines in Australian.

The guidelines (originally adopted in the US) suggested eating a diet high in grains and low in fat, with vegetables oils taking the place of most animal fats. The guidelines were controversial, and even the American Medical Association said at the time: “The evidence for assuming that benefits to be derived from the adoption of such universal dietary goals … is not conclusive and there is potential for harmful effects from a radical long-term dietary change as would occur through adoption of the proposed national goals.”

Those guidelines resulted in a diet that is low in fat and high in carbohydrates, and it has remained that way ever since. Many other countries, especially in the English-speaking world, followed the lead given by the Americans and copied their nutrition policies.

As a result, consumption of sugar and vegetable oils increased, while animal fat consumption went down.

The effect of the dietary guidelines

Looking back, it’s now obvious that the huge growth in obesity and type 2 diabetes (T2D) began at the same time as the dietary recommendations began to take effect.

The rates of obesity both in Australia and in the USA started to climb from almost exactly when the dietary guidelines were introduced, while the surge in type 2 diabetes cases started a few years later.

Rate of Overweight/Obesity in US

Experts are becoming increasingly aware that coronary heart disease doesn’t start with high cholesterol, but rather chronic inflammation. Inflammation is aggravated by lifestyle factors such as smoking, a diet high in sugar, vegetable oils and processed foods, inactivity, poor sleep and stress.

The evidence now points to sugar and processed carbohydrates being the main culprits rather than saturated fat.

This explains the steady increase in obesity, types 2 diabetes and other chronic diseases since the start of the low fat guidelines. Since we took the fat out of food and replaced it with carbohydrates, the results have been disastrous.

In fact, recently researcher Zoe Harcombe PhD went back and examined the evidence available at the time and found no scientific basis for the recommendations to cut fat from the U.S. diet in the first place!

Basically for the past 30-40 years the whole of the Western world has been part of a massive experiment - an experiment founded on dodgy science – to see if reducing saturated fat in our diet would reduce the level of these diseases. Instead the exact opposite has occurred. We have steadily increasing levels of obesity and type 2 diabetes in our communities.

What a disastrous failure!

The sooner we get back to the way our grandparents ate, lose our fear of saturated fat and acknowledge that sugar, processed foods and vegetable oils are the problem not fat, then the sooner we can start reversing the upward trend of these diseases.

Show me the evidence: A low carb approach to managing type 2 diabetes

5 surprising healthy foods that will spike your blood sugar