Show me the evidence: A low carb approach to managing type 2 diabetes

There is substantial evidence to support the use of low carb diets for the management of patients with type 2 diabetes.

In medicine, there are various levels of evidence and the highest levels are those associated with meta-analyses and randomised control trials (RCTs), the gold standard for scientific experiments. So let’s have a look at those in relation to low carb and type 2 diabetes.

To date, there have been 17 RCTs comparing low carb diets with low-fat diets in subjects with type 2 diabetes. Of these 17 trials, 15 showed an improved result with the low carb approach and two with low-fat. 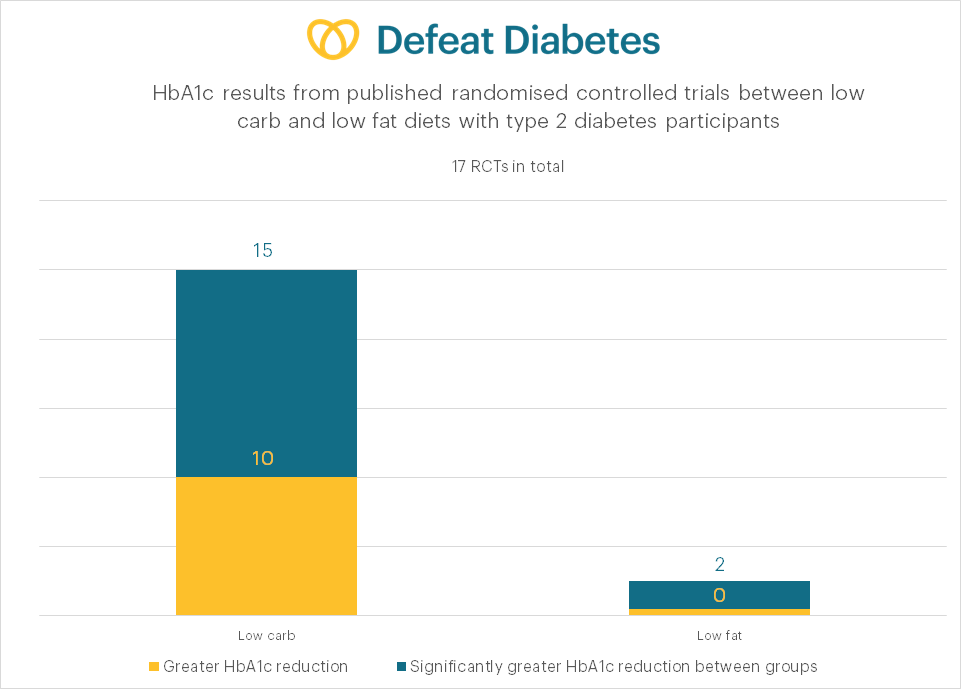 Subsequently, 10 meta-analyses have been conducted, which are statistical analyses combining the results of the RCTs. All 10 studies that showed a statistically significant difference favoured the low carb approach. The average improvement in HbA1c levels in the low carb cohort was 9.2mmol/mol) compared to 3.5mmol/mol in the low fat.

In the most recent RCT, published in October 2020, Chen et al explored the effect of a moderate (90 g/d) low-carbohydrate diet (LCD) in T2D patients over 18 months. Ninety-two poorly controlled type 2 diabetes patients aged 20–80 years with HbA1c average7.5% (58 mmol/mol) in the previous three months were randomly assigned to a 90 g/d LCD or a traditional diabetic diet. There were statistically significant reductions in HbA1c, blood glucose, medications, weight, waist circumference and blood pressure in the low carb group compared to a traditional diet.

The best level of medical evidence available therefore supports the effectiveness of low carbohydrate and ketogenic diets in the management of type 2 diabetes.

Is there evidence that this type of program can be effectively delivered online?

Online programs similar to Defeat Diabetes have been established for several years in both the UK and the USA.

A recent UK study reviewed results from the Low Carb program on diabetes.co.uk which had over 400,000 participants. Of the 743 participants in the study with a starting HbA1c at or above the type 2 diabetes threshold of 6.5%, 195 (26.2%) reduced their HbA1c to below the threshold while taking no glucose-lowering medications or just metformin.

In the USA, a remote care model run by Virta Health has also proven to be successful, with approximately 50% of participants putting their diabetes into remission.

How does the evidence support the Defeat Diabetes Program?

The Defeat Diabetes program uses the latest scientific evidence in our endeavour to achieve similarly excellent results. We are conducting ongoing research into the effectiveness of our program, the results of which will be published.

Furthermore, the increasing volume of scientific evidence demonstrates the effectiveness of the low carb approach to the management of type 2 diabetes and has been acknowledged by organisations such as Diabetes Australia, the UK National Health Service and the American Diabetes Association.

What is type 2 diabetes?

Can I really put my type 2 diabetes into remission?

63% now in remission - and that's not all our members report

8 of the best low carb recipes